Hotel serves local food from its own roof
In the recently built greenhouse on the roof of the sustainable, luxurious Hotel QO in Amsterdam, vegetables, fruits, herbs and fish are grown to be served to guests in the restaurant.

Covered Vegetable Garden
'But at night when it is dark you can see the LED-lights from far away', says gardener Matthias van den Berg. With his company Amstel Hoveniers he also designs and creates vegetable gardens and he has looked further into urban farming. Xander Bueno de Mesquita, the developer of this innovative and sustainable hotel, has asked to grow crops in this 'covered vegetable garden'. The sustainable horticultural greenhouse of 20 x 12 meters fits in with the idea of the hotel owners. 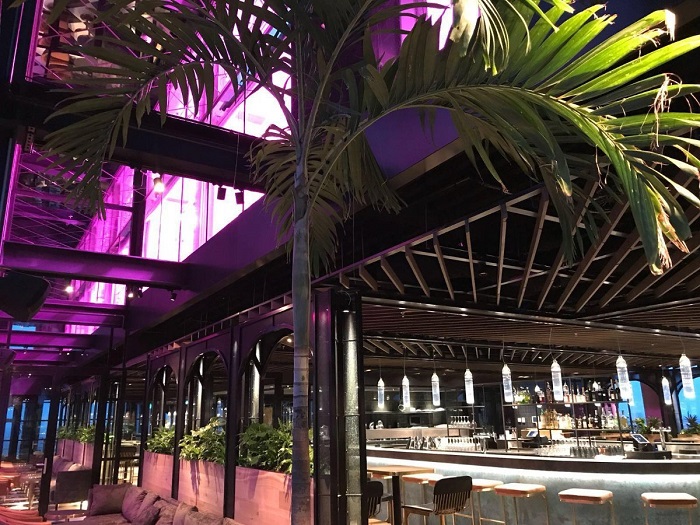 Living Building
The gardener: "The hotel must be a living building in which the four cycles of CO2, energy, water and waste have been closed as well as possible. The greenhouse has an important role in this." The building itself also contains numerous innovative applications and installation techniques, such as electric louvres in the glass facades to save energy on air conditioning and heating, as well as heat-cold storage, bio-cogeneration and heat pumps. QO Hotel is the first hotel in Europe to receive the highest certificate for sustainability.

Multilayer Cultivation
In the greenhouse, cultivation of crops is done on a thin layer of nutrient water (NFT-system) on multiple layers, without the use of chemical pesticides. The cultivation of vegetables and fruits is done in combination with fish farming (aquaponics). The fish, which are fully fed with 100% vegetable food, produce manure that rich in nitrites. The water from the fish tanks passes a biofilter. The nitrifying bacteria convert the nitrite into nitrate, a nutrient for plants. The water then enters the NFT-system. Plants extract their nutrients form the water, cleansing the water for the fish. The sustainable omega bass come from the Belgian fish farm Aqua4C.

Composting
Van den Berg: 'We want to go one step further by composting the organic plant plugs and the green waste from the two kitchens of the hotel restaurants. We do this with compost worms which we feed to the fish again. With the solid compost we make new plant plugs and the compost tea we use as an extra fertilizer to feed the plants.' The two restaurants in the hotel operate according to the Dutch Cuisine principle: to involve fair products as locally as possible. In addition, vegetables play a major role in dishes. 'Normally meat or fish is the main ingredient of a dish, but here the attention is also focused on vegetables. You do not get two beans, but many more vegetables on your plate,' says the gardener.

Sixty Different Varieties
'In close collaboration with the restaurant's two chefs, we have compiled a list of sixty different types of vegetables, fruits, herbs, cresses and edible flowers that are needed for dishes in the restaurant.' A substantial donation of seeds, including a number of varieties of tomatoes, mini cucumbers, wasabirucola, new celery and Salanova lettuce types (both new types and types that are still in the test phase) have been received from seed cultivation and selection company Rijk Zwaan. Van de Berg sows almost all the crops himself and grows them. The tomatoes are done in collaboration with plant propagator Leo Ammerlaan in Bleiswijk. In addition, the gardener has grown a number of old varieties of tomatoes himself, such as the strawberry-, cherry- and gooseberry tomatoes and the green zebra- and tiger tomatoes.

Herbs and Cresses
The herbs are special types of basil, parsley, chives, chervil, tarragon and Japanese samphire. Some examples of cresses are sea fennel, oyster leaf, sprout and pod shoots. For the cultivation of the cresses, the gardener works together with Koppert Cress. 'We will also grow pod flowers ourselves. Edible flowers are expensive to buy,' says Van den Berg. 'Moreover, a number of edible flowers can not be transported to the consumer after harvesting, because they have to be on the plate within half an hour. You can do that here. So there is a unique opportunity.'