MightyVine has been making a better tomato -- inside and out.

Highland Park native Jim Murphy had been working in agriculture for more than a decade when he began learning more about the greenhouse systems being used in the Netherlands. “It’s where the best technology is and where they’ve been doing it the longest,” he says. “I’ve always tried to analyze how they ran the greenhouses and their energy inputs to consider how it could be done in Chicago.”

Murphy and his team were focused on one crop, in particular: the tomato. In addition to being the No. 1 selling produce item in any retail chain, it’s also the one that travels far more than it ever should. “Over the last few years, we’ve gotten into the practice of moving produce long distances, and that works for some produce, but not for tomatoes,” notes Jim, who explains that tomatoes are harvested before they’re ripe and gassed before they hit retail floors in order to take on that “from-the-vine” red hue. “It might be red, but the inside is still white and mealy and has no flavor,” says his son Danny, who oversees the company’s sales and business development. “The last few days of the ripening process on the vine is when the tomato gets all of its flavor and when it turns that deep red color. That’s something we wanted to be able to offer the market within hours—not days or weeks.”

And while the team was ready to start delivering that within-hours produce off the bat, it took a little longer to get retail stores on board with the plan. “The first step was to meet with some of the grocery store chains here in Chicago and determine what their interest was, and what we found was that it actually wasn’t very high,” says Jim. “They had a difficult time understanding the difference between a commodity tomato and a really good, fresh tomato.” As a result, the team realized they needed to develop their own entryway into the marketplace and in April 2013 opened Local Foods, a Chicago-based food distributor and retail shop featuring produce from hundreds of Midwestern farmers. 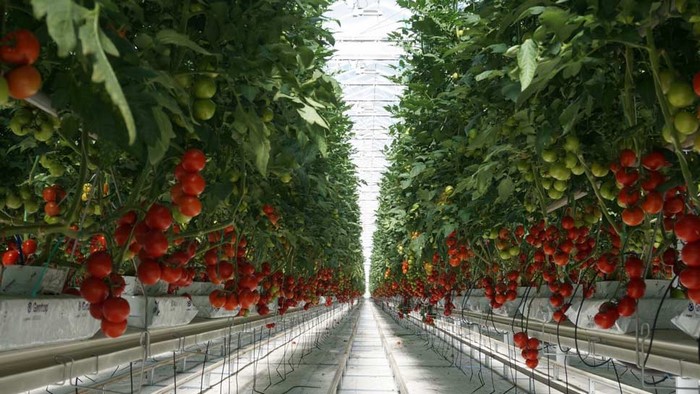 In October of last year, that number grew to include MightyVine, the Murphys’ brand of hydroponic tomatoes that are all grown with state-of-the-art greenhouse technology in Rochelle, Illinois. Take, for example, their use of diffuse glass, which relies on a film to help distribute the sunlight throughout the greenhouse to ensure even temperature control. They’re also reaching new heights in other ways. At 27-feet-tall, the greenhouse is one of, if not the, largest in the world—an accomplishment that goes far beyond looks. “The first greenhouses were maybe a few feet off the ground, but since then they’ve realized that the higher you go, the easier it is to keep a buffer between the top of the plants—the most fragile part—and the temperature outside,” explains Danny. “If you don’t have that large buffer, you could potentially damage the crop.”

It’s an occurrence the team works tirelessly to avoid, calling upon a well-maintained system that includes capturing, filtering, and treating rainwater, drip irrigating evenly, and bringing in bees and “beneficial bugs” to create a healthy ecosystem. The greenhouse currently holds approximately 100,000 plants, which yield 4.5 million pounds of tomatoes annually—and that number is only expected to double in 2017, when the team will be adding seven and a half more acres of greenhouse space.

The growth is following a steadily rising demand for the crop. While retail shops were slow to embrace the MightyVine methodology, the concept quickly caught on. The tomatoes can now be found in stores across the Chicagoland area, including Whole Foods, Jewel-Osco, The Grand, and Sunset Foods. They’ve also established a strong presence in the dining out community with more than 150 restaurants are stocking the bright red produce, from Prairie Grass Café to Gibson’s Steak House. 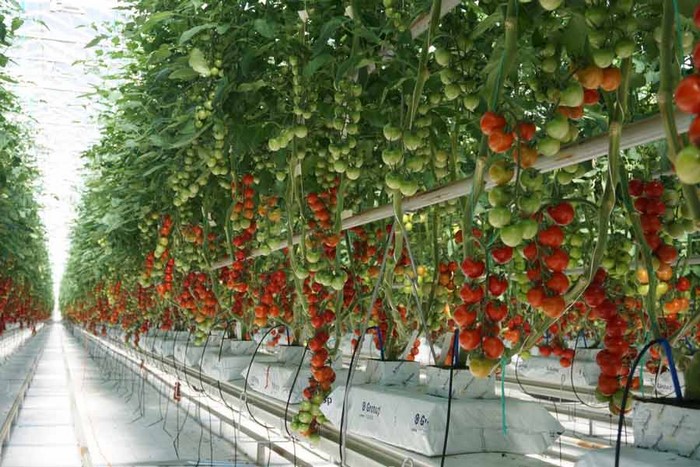 In addition to building up a team that is devoted to the company’s mission, Jim credits the uptick most heavily to this generation’s increased interest in the origins of our food. “More than ever people want to know what they’re eating, what’s in it, how it’s grown, and how fresh it is,” he says. “That’s what’s changing today—the marketplace—and we try to reach the customer who cares about what’s in their food.”

Danny agrees. “The Midwest has so many natural resources, so why should we have to grow something in California, where there are water conservation issues, when we could figure out a way to grow them nearby and rely on what Mother Nature gave us while also creating less commuting pollution and more job opportunities for people in our area?” he says. “It’s not easy to maintain consistent produce in the Midwest, but we’re trying to change that, slowly but surely.”